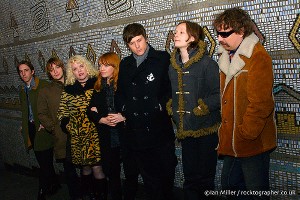 "First on though are the Flowers of Hell, who promptly inform us that there ‘set’ will only have two songs, albeit both very long ones. Their music soon emerges as a mix of Velvet Underground-style drone minamalism (replete with Mo Tucker-style drumming) and hypnotic style guitar, all built around dense violin takes, with echoes of the first Velvet Underground album never far off. Thankfully they’re more than the sum of their influences – a lot more – and there’s some particularly deft use of e-bow, which rises to a thunderous crescendo. They finish a magnificent set to a rapt audience." pennyblackmusic.co.uk Ruth Barlow on EBow