Tilt the EBow to one side to decrease the drive even more. This produces a cleaner, less distorted sound, good for realistic bowing strokes, especially on the lower strings. Sometimes, it may be necessary to tilt the EBow away from the low E string to keep it from buzzing against the DriveChannel.

Rhythmically press-and-release the tilted EBow over the HotSpot for a dramatic tremolo.

Or use the harmonic mode as a hand held wah-wah. 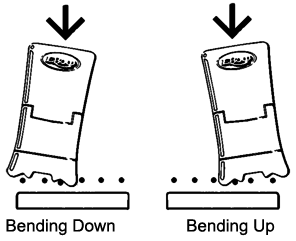 When bending a note above the 12th fret, you may need to tilt the EBow and add a little pressure to keep the string from bending out of the drive field.

You can also try backing the EBow away from the pickup where the string bends less (nearer the bridge).