Methods of Control - Moving from String to String 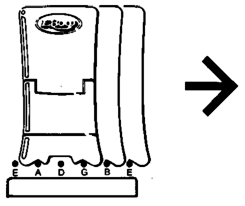 The EBow slides from string to string and aligns itself over each string as you cross. No need to force it or visually line it up. Just get the EBow close and let the GuideGrooves slip into place. Steady your wrist and use arm movement to help keep the EBow in line with the strings. You don't need to lift the EBow, just relax the pressure and lightly push it to the next string. Stay near the pickup for a strong signal with minimal noise from the EBow rubbing across the strings.

Tilt the EBow and release pressure on the low strings. Press the EBow and tap the fretboard harder on the high strings. This should give you an even response as you play across the strings.

Try gripping the base of the EBow with just your thumb and forefinger. This makes it feel more like a pick and makes skipping over strings easier.