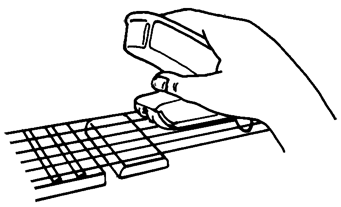 Return to using your bass pickup.

Grip the EBow with your thumb and forefinger to free your other fingers for plucking. With your thumb in the crook of the EBow, position your ring finger behind the EBow and pluck the string in the DriveChannel. For a bluesy guitar sound, hold the EBow slightly above the strings and about 1/4 inch from the HotSpot. Pluck the string, then bring the EBow close enough to sustain the string but not overdrive it. This creates a warm tube-amp distortion. Try this using the harmonic mode, nearer the HotSpot, and bring the EBow close to the string for a dramatic wah effect. Bends and vibratos work well with this technique.

EBow the low E or A string while plucking the G, B and high E strings. If necessary, back away from the pickup and tilt the EBow away from the string to balance the volume between bowed and plucked strings.