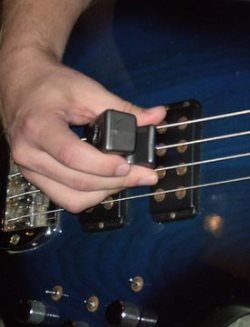 The EBow was designed for guitar string spacing. It gets its necessary alignment by resting on the strings adjacent to the one you're playing. To play the EBow on bass, you must accomplish this critical alignment in challenging ways. You can use your thumb and forefinger off the edges of the EBow to simulate wider spaced GuideGrooves that rest on the adjacent strings. You can also tilt the EBow keeping just one adjacent string engaged for alignment. Let the engaged string slide up the side of the EBow to bring the DriveChannel closer to the driven string. You can rest one edge of the tilted EBow on the fretboard between the strings and rock the DriveChannel into position over the string you are playing. Or, you can just hold the EBow in the proper position through sheer will and determination. Light gauge strings and a touch of distortion can prove useful, especially in the harmonic mode.