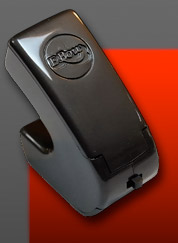 Opeth in NYC: Progressive Rock or Jazz Metal? Opeth has a wonderfully smooth guitar sound; on recordings Akerfeldt uses an "ebow" device (a prog-rock guitar effect from the 1970s and now rare). On tour he replicates the sound with various effects settings that do the job live, though it is not a precise replication. He has said he does not take the ebow on tour for fear of losing it!
Opeth

Rhythm of life: Byrne solo still echoes Eno influence The musician also played more impressive electric guitar than he has in quite some time, churning out some entrancing E-bow drones in “Never Thought” and unleashing a particularly fiery solo in “Houses in Motion,” accompanied by his typically stiff-limbed and pseudo-spastic take on Chuck Berry’s famous duck walk.
David Byrne

Byrne burns down the house [David] Byrne rotated between his Fender Strat or Telecaster and acoustic guitar, showing himself a more supple (although still avuncularly awkward) dancer and more fearsome soloist (often using the intense buzz of an electromagnetic Ebow in place of a pick) than one might have guessed about the barking, twitching frontman of his youth.
David Byrne

Like I said before (and will say again before this review is over), cello and e-bowed guitar leads should get married. The complexity in harmonics the e-bow creates makes it a pinnacle of expression. Coupled with the expressive playing of Dave Wesling, the end result is breathtaking. Article by Belgarath
Anathema

"I was born one starry night in the year of punk rock. I believe in the energy of the e-bow, emanating like the cosmic drone that's at the centre of our Universe. I capture the distant sounds of the ether and filter it through my music like a messenger from space." Dominic B. Simpson at pennyblackmusic.co.uk

Blue Öyster Cult: The History Project: 1985 "I've always thought that (Don't Fear) The Reaper sounds so incredibly much better live than the original studio version. The classic arpeggio riff cuts through far more effectively with Buck's live sound and then there's the superb end instrumental which just builds until the spectacular ending. Live, this track is simply amazing and it certainly does the business tonight. Eric played his BOC symbol shaped guitar on this one and I recall watching with interest as he used an Ebow to hold the long note on the last verse. The song concludes to enormous applause and the band leave the stage."
Blue Oyster Cult

Brian Eno and I recently finished our first collaboration in about 30 years. For the most part, Brian did the music and I wrote some tunes, words and sang. It's familiar but completely new as well. We're pretty excited. In August the music will be available via this Web site, free for streaming and it will also be available for purchase as both a download and in physical formats. One of the songs will be available free of charge.
David Byrne